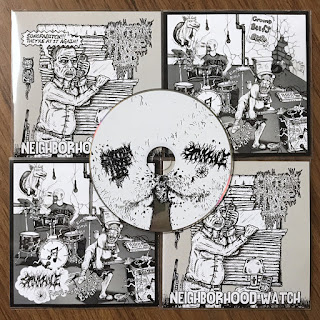 CAPTAIN THREE LEG (USA) / STINKHOLE (USA) - “Neighborhood Watch / Aural And Olfaction Butchery” split CD... 63 trax of savage noisecore brutality from C3L with bits of harsh noise mixed in for texture; shorter, faster and harder than anything else in their catalog. Stinkhole assaults two senses at once with 157 trax of improvised noisecore crud with pants shitting where the vocals should be. Recorded in 1996 and 2005 and originally slated for a 7" release that never happened, this noxious mess is finally available for consumption. Limited to 300 CD version available now from Housepig and Mortville Noise for $3.00 + shipping.

* The CD is packaged in a poly sleeve with a standard 4 panel insert. If you feel you must put it inside of a jewel case, a printable tray card is included with the Bandcamp download. 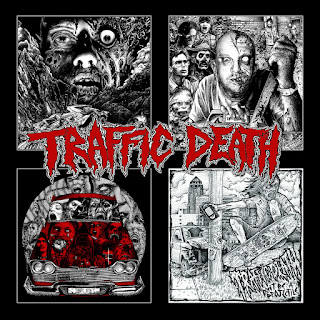 Traffic Death are a violent crossover thrash band with veterans of the Des Moines, IA extreme metal and punk scenes. Their music is a summary of their musical past, fusing together several sub-genres of metal, punk and all points between. Before forming in 2013, their members had already played hundreds of shows with their previous bands Black Market Fetus, Dark Mirror and Nancy Grace Death Squad. Their experience shows, both recorded and on stage.In their five years as a band, they’ve released two LPs, a 7” and a split 7” with Ft. Wayne horror punks, The Lurking Corpses. “Four Disc Pile-Up” compiles all of their recordings on one CD that includes a 12 page booklet with all of the lyrics and art from the original vinyl releases. It’s the perfect soundtrack for a vehicular homicide, or for the drive home from dropping off the little ones at school, depending on your temperament. 32 tracks / 59 minutes, $5.00 + shipping. 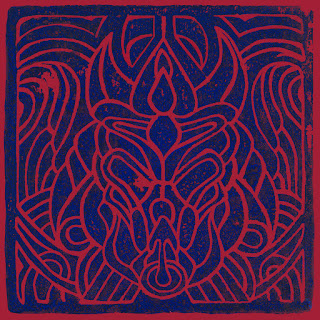 Unfortunately for Nee!, most people’s introduction to the band was their split 7” with Warsore - arguably the greatest band in grindcore. Their drummer once told me he thought the record was a mistake, but I wouldn’t have asked them to do it if I thought the two bands weren’t evenly matched. Though they were absolutely buried by what ended up being Warsore’s best material, Nee!’s “30 Song Demo” was grind/noise perfection. It was everything I loved about grindcore, and I wanted more people to hear them. Twenty years later, Mortville is proud to reissue the band’s entire recorded output in one package. Collected on this CD is their “Nee Means No” CD, “30 Song Demo”, split w/ Warsore 7”, split w/ Pissed Off Orgasm cassette, tracks from the “Three Bean Salad” compilation, “Unearthed” compilation, plus unreleased live and studio material. It’s 119 tracks / 77 minutes of unhinged, bulldozing, blast-driven Dutch grind/noise on a 98 track CD. $5.00 + shipping. 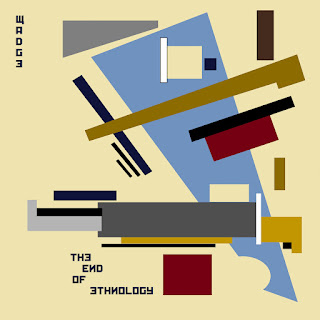 I thought I was done with physical releases, but the opportunity of releasing the new Wadge full-length was too good for me to pass up. It took a while for it to come together, but I couldn't be happier with the results.

"Ethnology" is defined as the study of the characteristics of various peoples and the differences and relationships between them. When we examine those characteristics, especially within certain subcultures, we don't always like what we see. "The End of Ethnology" is a 32 part commentary on the world and all of its ugliness. Its lyrical content is as sharp and abrasive as the music. This album is for those who value the ability to freely speak your mind over the modern worry of tiptoeing through the misguided muck of feelings. The anti-fascists have become the fascists. Modern day witch hunters trampling through life with stakes in their eyes. Redefining language and soothsaying thought. No one is immune from their delusional social arson, but only you can decide whether or not you burn. Stop, drop and roll, motherfuckers.

The CD and download both have exclusive content. The are four extra tracks on the CD, whereas the download comes with a 35 page PDF with lyrics and graphics for each song. Buying the CD through Bandcamp is the only way to get all of the content for one price. 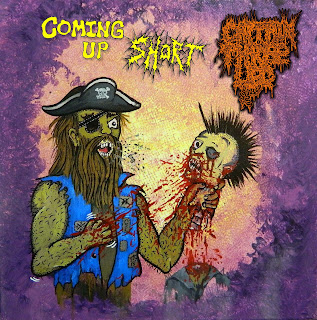 "Coming Up Short" is the world's shortest full-length; 40 cover songs in less than 4 minutes.I was listening to The Dehumanizers and it made me think of all the atypical micro-songs from bands who normally played normal length songs. I thought it would be cool to collect them all in one place, but decided to just record our own versions of those songs instead. The bands we covered considered these to be proper songs, so we consider 40 of them to be a proper full-length. It's an exercise in futility. 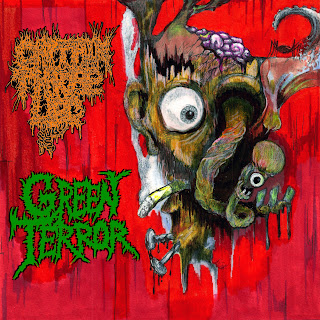 Also released is our split with GREEN TERROR from California. Nate from BLACK MARKET FETUS handled all of the vocal duties on this split and gave these songs an entirely different sound. The music was all written and recorded over the span of a couple of hours and has more of a crusty HC sound than usual.There's a couple of Sore Throat covers thrown in the mix, too. GREEN TERROR have been at it for a couple of years now and they get better with each release. Recently Ben from GORGONIZED DORKS has taken over behind the kit, so this is their last release with the old drummer. Intense, spastic grindcore with ridiculous samples and a decent sense of humor. 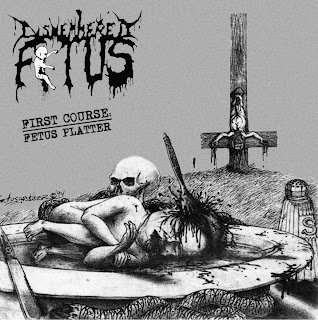 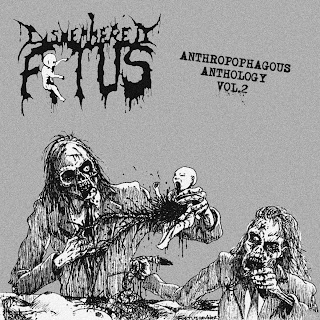 This stuff needed to be collected, plain and simple. For the sake of the music, yes, but also to pay tribute to Joshua "Ace" Stough's contribution to extreme music. I've been a fan of Dismembered Fetus and a friend of Josh's since 1995 and I haven't heard half of these recordings until recently. It's criminal how underrated Dismembered Fetus were as a band and how difficult it was for me to track down their earliest material. I considered myself to be one of the people in the fold (well, maybe just on the fringe), but it alluded me for nearly 20 years. Even in the Internet age, precious little information has turned up about them and only low resolution scans of Foetusgrubber's beautiful artwork could be found. There wasn't much to work with when compiling this collection, but with help from a friend and hours of plundering through fanzines untouched for almost two decades - here is the bulk of their work. The music is as visceral today as it was in the 90s and finally hearing the first two demos gave me a whole new appreciation of their evolution as a band. Literally all of it, though, is absolutely crushing. This hatred they captured on tape sounds genuine, too, and nobody since has been able to duplicate this sound. This is truly angry music, menacing and ugly. Fuck, I miss the 90s.

This release is dedicated to Joshua "Ace" Stough. Though you're gone in form, the memories and your music will live on forever. RIP, 1975-2008. 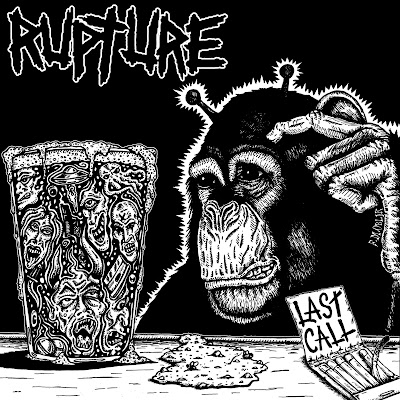 This Arthouse show was the first and only gig they played after my trip to Australia, recorded months after my return to American soil and months before Gus' death. Had they played while I was there, it's likely this mess is what I would have witnessed. A "mess" is the only way I can describe this, really. This has been floating around the Internet for years now on file sharing sites, and I've listened to it heaps of times before asking to release it. Before reading Zombo and Stumblefuck's notes, I had no idea that the *thwock* sound that occurs throughout the recording was the sound of Gus bashing the microphone against his face. Even with a face full of blood, he managed to keep it together most of the time. It may not have been what the Melbourne grind syndicate was looking for in a Rupture performance, but for fan of going on 20 years, even at their worst, it's satisfying.

A few of these songs appeared on their split 7" w/ Opposition Party, but here it is in its entirety with the audio cleaned up as well as possible.

"By our final gig we were pretty burnt out, the band was a train wreck, we were all jobless alcoholics and rehearsals were basically fist fights. It was going nowhere. Gus was off the rails, but then again we all were really at that time. We played drunk & sloppy. I was playing through some shitty little practice amp with a banana shoved down my jeans. During a song I took it out and peeled it and threw it at some girls in the crowd, but they ducked & it hit the bar chick in the face. She was furious. She hated me, our band, everything to do with Rupture. Mullschlucka were a very short-lived Geelong thrash band doing Dayglo Abortion covers. The Kill had Neil on vocals. I don't think Corruption even played, no idea who they were. Neil bloodied himself up on stage, so not to be outdone, when Gus got on stage he spent more time smashing his face with the microphone than actually singing. The gig was a total fucking mess. But hey, afterwards I had a few Geelong crew slap me on the back laughing, so maybe at least a few folk found it entertaining. In hindsight this gig accurately reflected where the band was at the time - in the process of total meltdown. RIP Gus." (Stumblefuck, 2013) 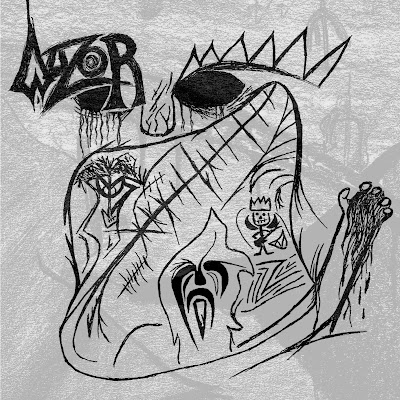 Wuzor recorded a decent chunk of music during their short existence, and it was consistently good. Dave and I were trading records at the time, so I acquired all of their records as they were released. The last package I got from him had a CDR of his new band, Funeral Shock, and a letter saying Wuzor had disbanded. We lost contact after that, but those records were in heavy rotation at my house for a couple of years. I forgot all about Wuzor until I listened to all of my CDs last year and found a disc with some unreleased tracks on it. Listening to it inspired me to get in contact with Dave to see about releasing it, but I only knew him as "Dave". Even today, I still don't know his last name. Googling combinations of Dave + Wuzor + Wolfman Records + Funeral Shock turned up nothing. A month prior to this I refused a friend request from Dave on Facebook because I didn't recognize the name. Eventually, he sent me a message and everything fell into place. It's funny how these things come together sometimes.

Wuzor's music is many things at once and reflects what I can only assume were their influences at the time. It's as sludgy as Sloth (but less stupid), as epic as Neurosis (without the pretense), as heavy as Floor (minus the pop tendencies), and rocks as hard as the Melvins (without the comedy hairstyles). Because all of this stuff was recorded at the same studio, it plays like the full-length album they never recorded.